Be swept away by the eclectic history of Cuba’s capital as you cruise through Havana in a vintage American convertible and enjoy a 2-night feature stay at the iconic Hotel Nacional.

Experience old-world charm at a leisurely pace in the colourful coastal town of Trinidad. Delve into the city’s sultry Latin rhythms with a salsa class and enjoy plenty of free time for seaside relaxation.

Glide around the culture-soaked streets of Camaguey in true local style – on a bicycle taxi! Feel the breeze on your cheeks as you explore parks, plazas and markets from the backseat of this traditional mode of transport.

Relish a real garden-to-plate dining experience at an organic eco-farm in picturesque Vinales – indulge in a variety of fresh produce all while gazing across sweeping views of the valley.

Receive a fascinating insight into the rise and fall of the charismatic and highly celebrated Cuban revolutionary – Che Guevara – at his mausoleum and museum in Santa Clara.

Experience Cuba’s finest on an incredible journey across the colourful Caribbean island. Combining leisure, culture, coast and country, discover the depth of Cuba’s most fascinating traditions. Look behind the legend of Che Guevara, witness daily life in Vinales’ verdant tobacco fields, peel back the curtain on Santiago de Cuba’s ballet culture, wander the French-infused waterfront of Cienfuegos, dance to Cuban rhythms in Trinidad and go snorkelling in the Bay of Pigs. Finish it off with a cruise through Havana’s grand old streets in a classic American convertible.

Welcome to Cuba's capital. Your tour begins with a welcome meeting at 6 pm. If you arrive early, the day is yours to explore. Consider a stroll through Old Havana to acquaint yourself with its colourful mix of '50s Americana, colonial architecture and budding modernity. There are plenty of good museums to check out, such as the Museo de la Revolucion (Museum of the Revolution), which is housed in the former Presidential Palace, and the Museo Nacional de Bellas Artes (National Museum of Fine Arts). Perhaps line up with the locals for a taste of the legendary Coppelia ice cream, or wander along the Malecon, the sea wall that skirts the coastline. We recommend arriving a few days early to make the most of this exciting city.

Today you’ll take a day trip to the picturesque town of Vinales. Located in the beautiful province of Pinar del Rio – Vinales is a landscape of tobacco and agricultural fields dotted with limestone outcrops. Enjoy a walking tour of tobacco crops and lush cultivated lands for insight into rural life, then relish a real garden-to-plate experience with an included lunch at an organic eco-farm. Indulge in a variety of fresh produce – from numerous vegetables and salads – to meats, seafood and salsas – all while gazing across sweeping views of the verdant valley. The rest of the afternoon is free to explore Vinales before returning to Havana for the evening.

Get picked up at 8 am to head to the airport and take a 2-hour flight to the opposite end of the island. During your bus ride – learn the local lingo from your leader with an informal Spanish lesson. Santiago de Cuba is the hottest place in Cuba – arguably in terms of both atmosphere and climate. Drop your bags at the guesthouse and head out for lunch (optional), while your rooms are made ready for check-in. Afterwards, your leader will take you on a short orientation walk and then you are free to relax or explore for the rest of the afternoon and evening. This ‘cradle’ of the revolution is home to a large Afro-Cuban population and a vibrant music scene so there is lots to experience after sundown.

Today your leader will take you on a 3-hour city tour of Santiago where you’ll learn about the town’s vital role in the revolution while visiting sites such as El Morro Castle, Santa Ifigenia Cemetery and the Moncada Barracks – the city’s half million residents are proud of their traditions, so you'll find plenty of museums around the town. Santiago is also famous for its energetic celebrations of Caribbean culture such as Carnaval – a 5-day festival that occurs every July. In the evening, you’ll get the unique chance to dine with a local family in their home, for a real slice of Cuban life and the chance to sample local food. This is a wonderful opportunity to get to know the locals and perhaps practice some Spanish.

Enjoy a free day in Santiago de Cuba. If you want to delve into Santiago’s sizzling music scene, perhaps learn a few moves in a salsa dancing class – or for a taste of the city’s vibrant Carnaval celebration, visit Museo del Carnaval (Carnaval Museum) to see floats, costumes and the occasional dance show. Those looking to get active may want to climb the 452 steps to La Gran Piedra (The Big Rock), a natural viewing platform 1225 metres (4019 feet) above Santiago for stunning panoramic views of surrounding hills and mountains. In the evening, there are plenty of atmospheric venues with good Cuban rum and even better music for locals and tourists to showcase their dance moves.

Today, head west along the Carretera Central to Camaguey. The drive (approximately 6 or 7 hours) is broken up with a stop in Bayamo, where you can stretch your legs on walking tour and enjoy an included lunch. When you arrive in Camaguey you’ll soon notice that the city has maintained much of its colonial heritage. It is also characterised by winding streets, which are a joy to explore. Get acquainted with the city on a leader-led walking tour, including a stop at the Iglesia de Nuestra Senora de la Soledad (Church of Our Lady of Soledad) to see its Baroque frescoes.

Today you’ll tour the sights of Camaguey in the same mode of transport as the locals – from the back of a bicycle taxi. Each taxi carries two passengers and the tour is led by an English-speaking local guide – hop on and visit parks, plazas and local markets before enjoying a free afternoon at leisure. The town is home to an excellent farmers market brimming with colourful vegetables, tropical fruits, herbs and lively local merchants. Later, visit an esteemed ballet theatre for a fascinating glimpse behind the curtain. Meet some of the people who keep the school running like the seamstresses, shoemakers and costume designers. As it is not possible to purchase things such as ballet shoes in Cuba, everything for the ballet school is made on the premises.

Travel by private vehicle to Santa Clara (approximately 4 hours). Along the way, stop at Ciego de Avila to visit a well-known local gallery that showcases unique sculptures made with a range of silverware. Talented artisans recycle discarded cutlery and skilfully create works of art to admire or purchase. Arrive in the revolutionary city of Santa Clara and acquaint yourself with the streets on a leader-led orientation walk. Less crowded and slower paced than Havana, Santa Clara is renowned for being the resting place of physician turned guerrillero leader, Che Guevara. Your leader will point you in the direction of the top sites to explore during your free time. Perhaps you would like to enjoy sweeping views of the city from one of the best lookout points in town, Loma del Caprio (Capiro’s Hill) – or for an additional cost you can opt to take a tour of one of Cuba’s best tobacco factories, Constantino Perez Carrodegua, where they produce a range of top-quality Montecristo, Partagas and Romeo y Juliet cigars.

Visit the final resting place of Cuba’s most famous son, Che Guevara. Che's remains were brought to rest here after they were found in a remote corner of Bolivia in 1997, where he was assassinated by the CIA-backed Bolivian army. The memorial is home to an impressive bronze statue of Che bearing his rifle and inside the museum, you can learn about his amazing life and see photos and exhibits such as letters, firearms, medical devices and other interesting artefacts – including his famous black beret. After this incredible insight into Cuban history, travel to Trinidad (approximately 2 hours) – a well-preserved colonial town that sits on the scenic Caribbean coast. On arrival, familiarise yourself with the area on a leader-led orientation walk. Later, delve into Trinidad’s sultry Latin rhythms with a salsa class.

Trinidad is a standout destination for many visitors to Cuba, due in no small part to a friendly populace, old-fashioned feel and particularly well-preserved colonial buildings. The Santeria religion (a voodoo-like Afro-Cuban tradition) which is practiced here makes the town even more intriguing. Today is free for you to explore Trinidad at your own pace – perhaps enjoy some swimming at Playa Ancon or hire a bike and cycle along Trinidad’s colourful streets, past once-grand mansions, pastel buildings and wrought iron features. Hiking is an equally good option, there are some excellent walking trails in the nearby Sierra del Escambray mountains. For an insight into the colourful post-revolutionary period, why not visit the Museo Nacional de la Lucha Contra Bandidos and the Casa de los Martires de Trinidad. Nearby is the sprawling Valle de los Ingenios, where sugar plantations stretch out as far as the eye can see. Attending a traditional Cuban dance show is also a fine choice.

Continue along the picturesque coast to Cienfuegos, a slice of Paris in the Caribbean. Take an orientation walk through its charming streets, before stopping at the opulent Palacio del Valle, hopefully in time for a sunset rooftop drink. Enjoy free time to perhaps stroll the promenade before reuniting with your tour leader for an included group dinner.

Begin the day by travelling to a peaceful sandy arc on Cuba’s southern coast, commonly known as the Bay of Pigs. Learn about the Bay of Pigs Invasion – the battle between the US and the Cuban revolutionaries which resulted in the first defeat of a US-backed takeover in Latin America – then stop for a dip in its tranquil waters, either at Playa Larga or Playa Giron. With a deep underwater wall just off the shore and an outstanding variety of coral and fish, it just might be Cuba’s best-kept secret. Continue your journey back to the capital of Havana (approximately 3 hours) where you’ll check in to the iconic Hotel Nacional for a 2-night Feature stay. Declared a national monument, Hotel Nacional is considered a symbol of history, culture and Cuban identity. The rest of the evening is at leisure.

This morning, you will be picked up from the famous Hotel Nacional to see outer-Havana in a convoy of classic American vintage cars. Cruise via points of interest such as the Malecon, Revolution Square, Vedado and ending in Old Havana. Next, your leader will take you on a walking tour around the charming neighbourhood of Old Havana (approximately 2.5 hours) – a district that reflects an eclectic mix of different eras with its colonial architecture, baroque buildings and neoclassical monuments. Founded in 1519 by the Spanish, this area within Cuba’s capital remains virtually unchanged which makes it one of the Caribbean’s most impressive historical cities. Wander through Havana’s oldest square, Plaza de Armas, stroll around the architecturally eclectic buildings that line the 16th century Plaza Veija, admire the basilica of San Francisco de Asis and visit the Cathedral with its elaborate baroque facade. Now that you are orientated in Old Havana you have until lunchtime to explore further.

There are no activities planned after your breakfast today. If you have time – why not find out more about the local customs, folklore and beliefs of Afro-Cuban religions from an insider on a colourful and unconventional 2- hour tour with Urban Adventures. Visit local homes and learn from devoted residents as you explore one of Havana’s sub-cultures not often seen by tourists. For more information – visit urbanadventures.com 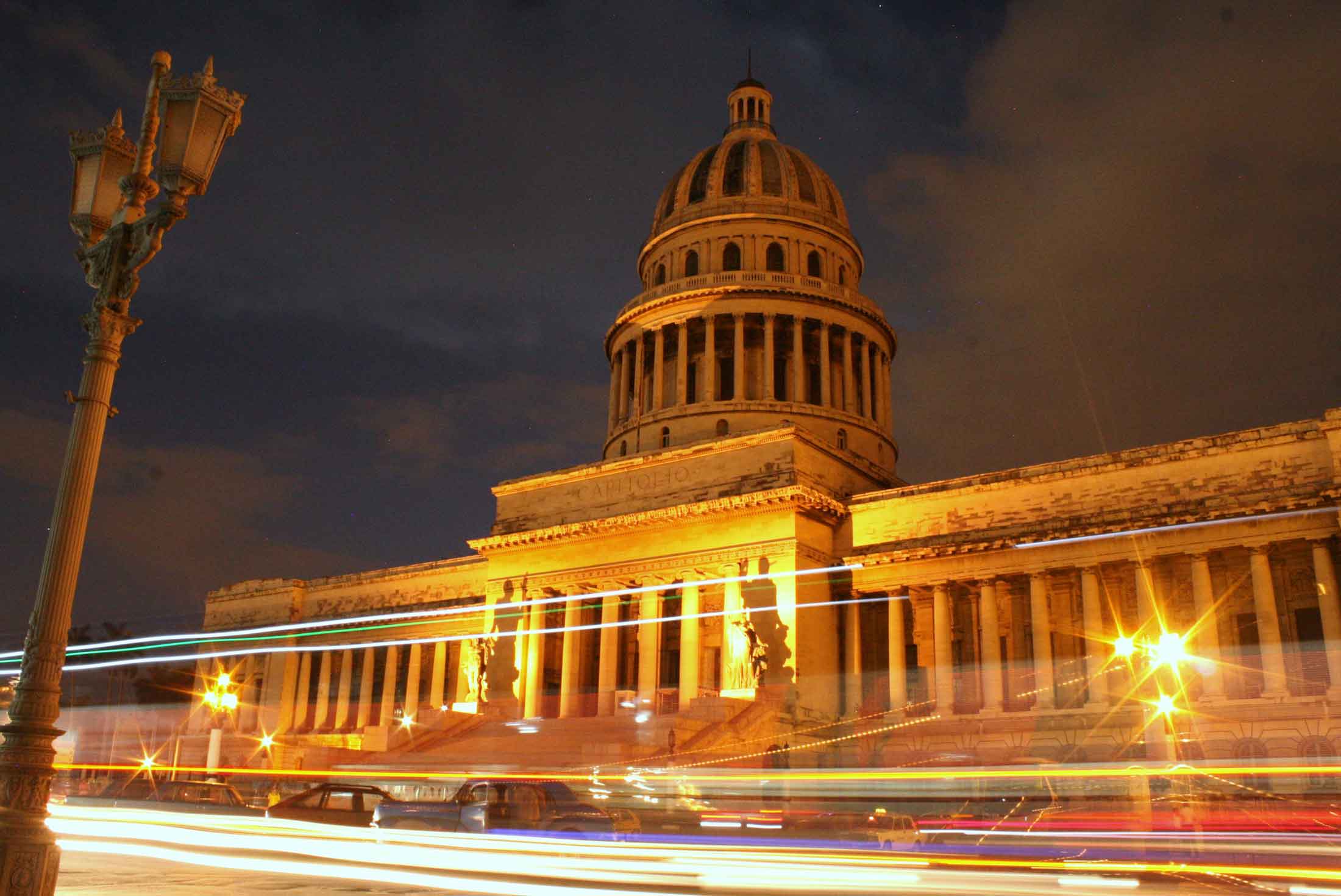 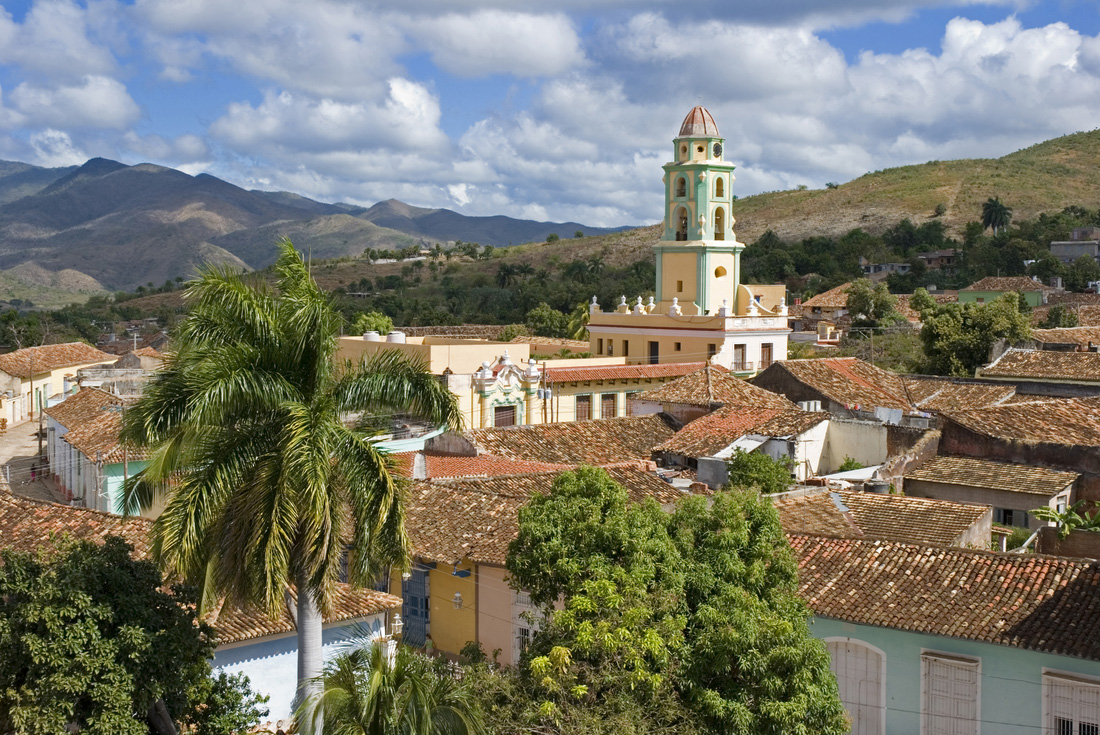 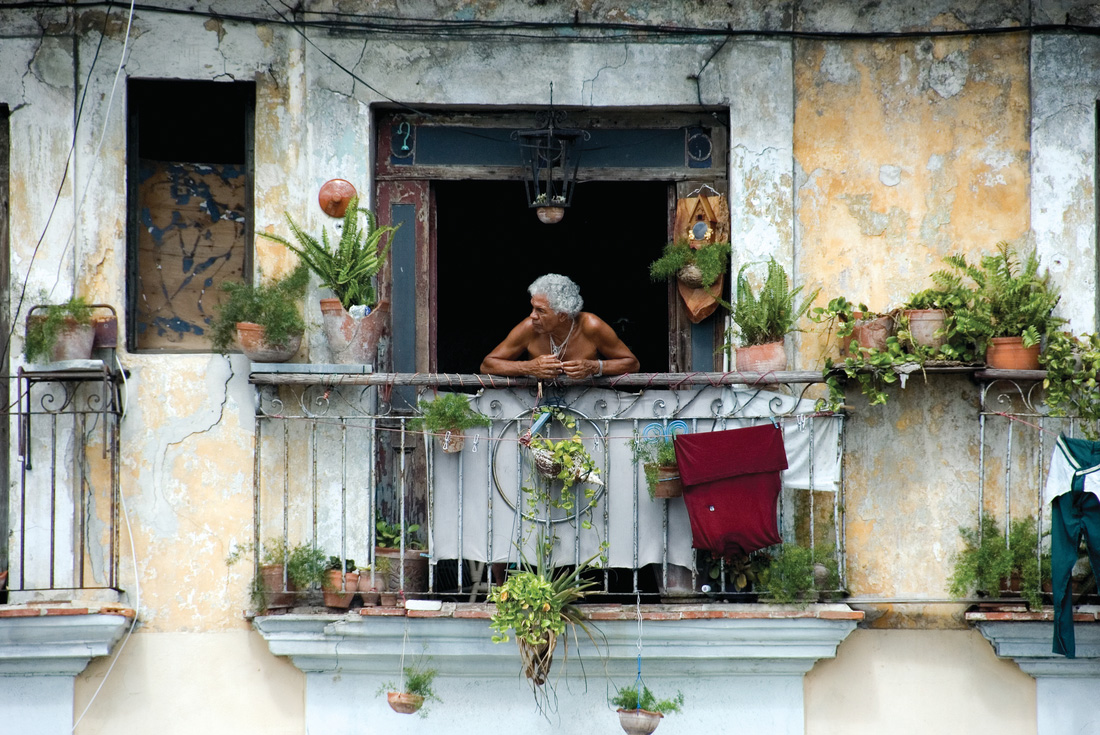 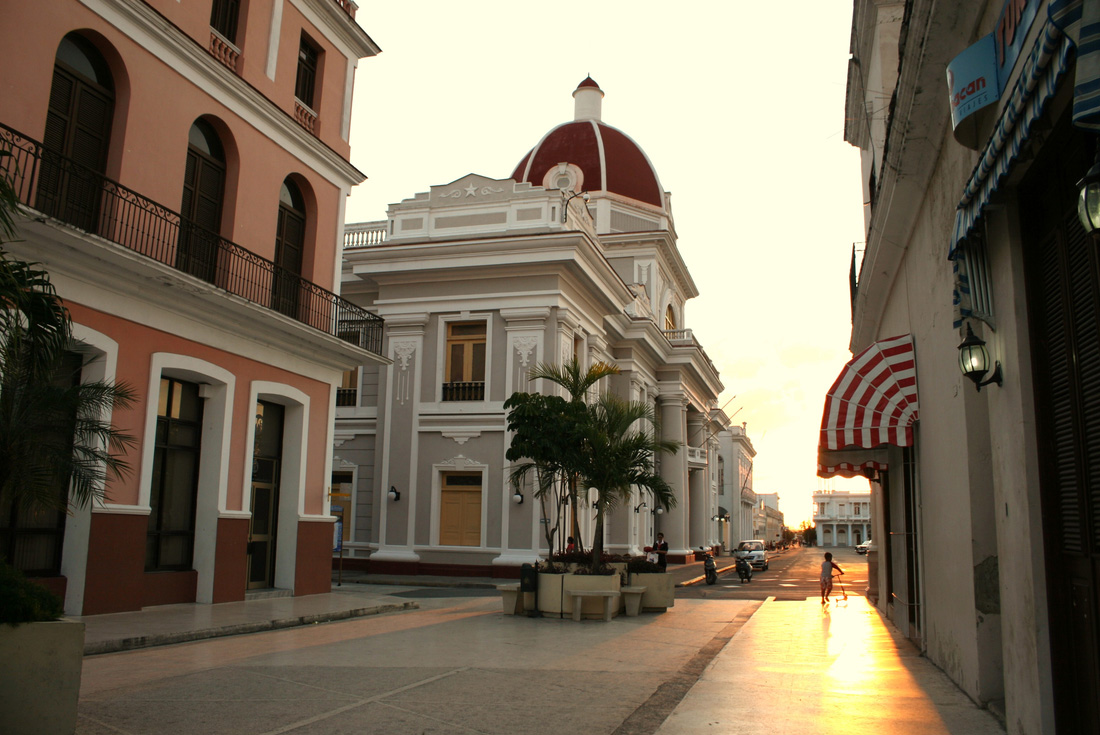 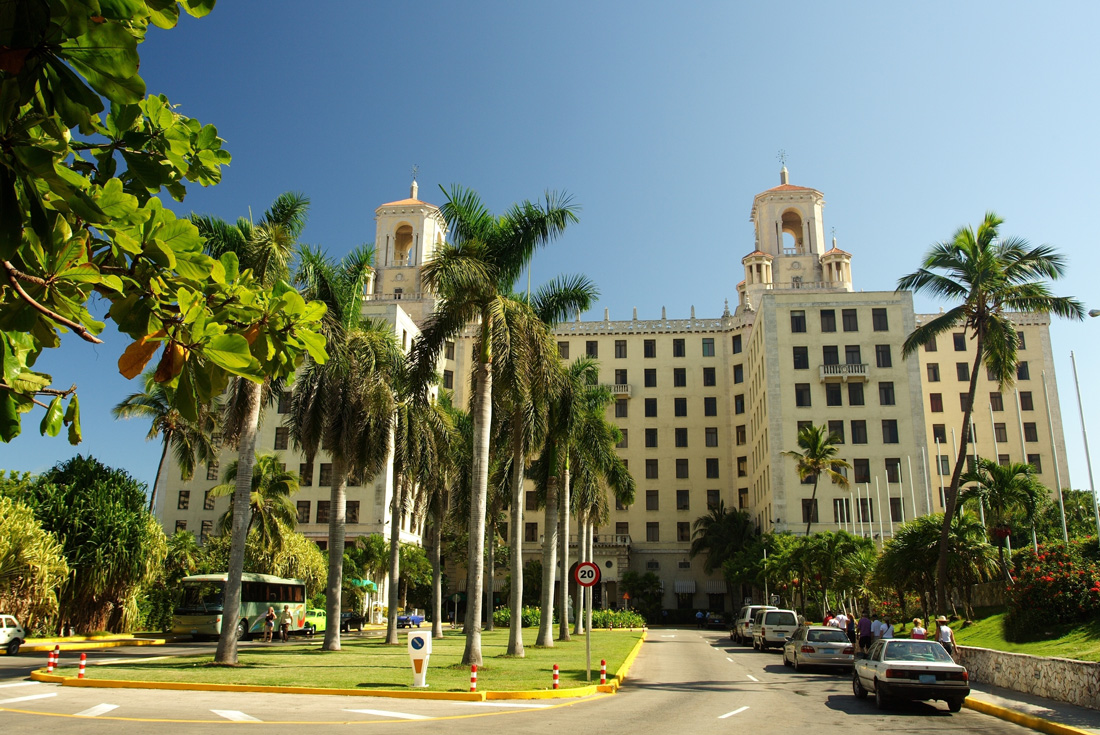 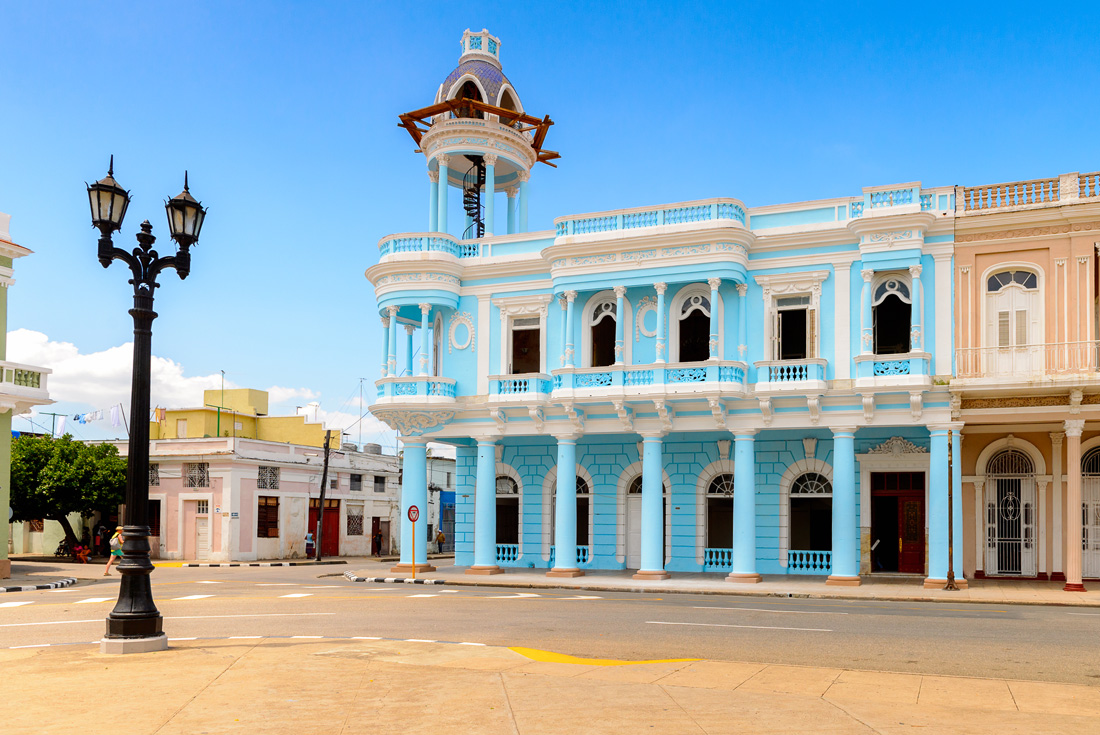 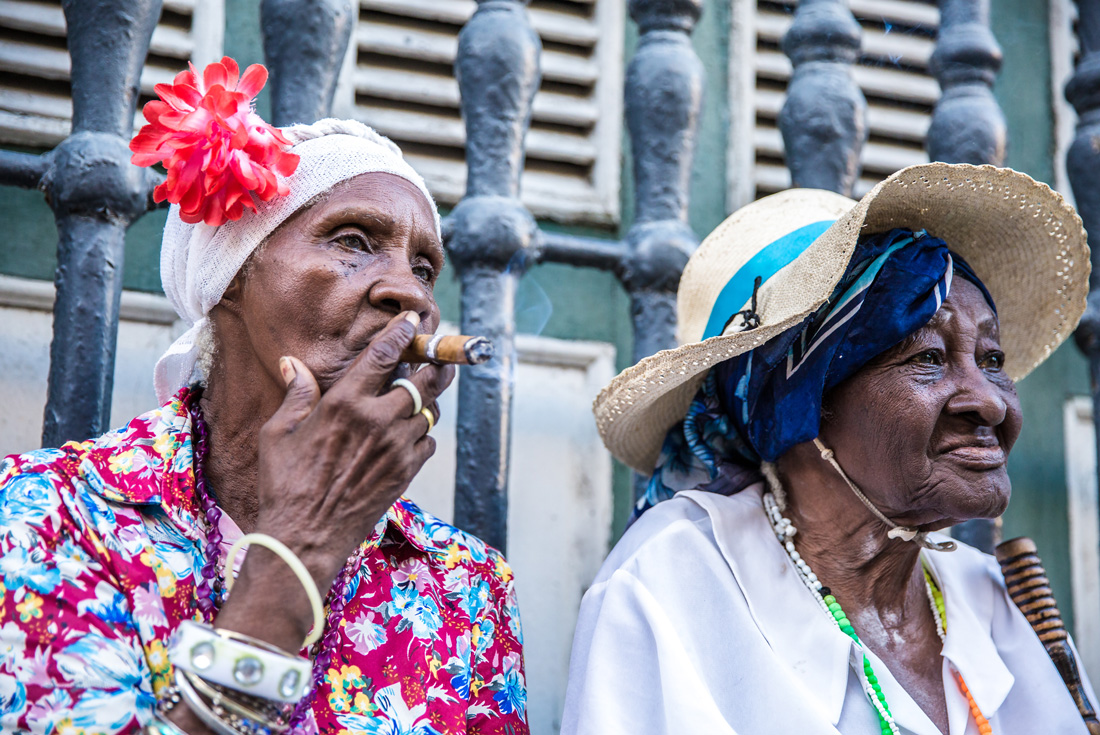 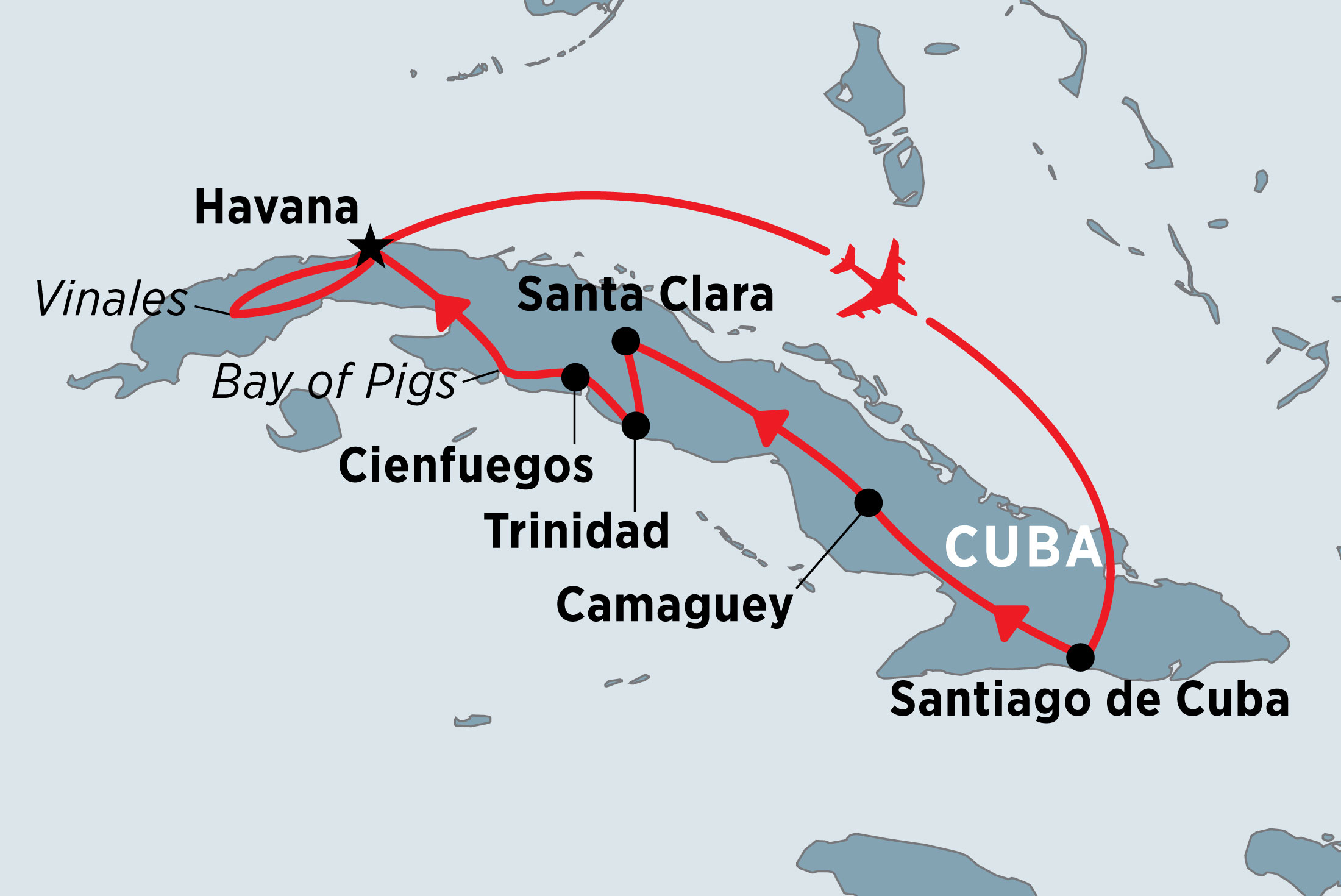