The much-photographed Registan in Samarkand is one of the true pinnacles of Islamic architecture. You'll be wowed by the scale, grandeur and beauty of the monuments to iconic figures such as Tamerlane and the Persia-influenced madressas, mosques and mausoleums.

Central Asia is a fascinating and unique mix of ancient Silk Road culture, Soviet influence and striving to redefine nations post independence. Geographically and for a time historically, it is the real centre of Asia.

Spend an evening in the isolated Kyzylkum Desert, warming yourself by the fire and sleeping in a yurt.

Get to really know the stories and people of Uzbekistan while sharing home-cooked meals with local families, including a home stay in the remote Nuratau Mountains.

Spend time in World Heritage-listed Bukhara, a 6th-century-BC city that's drenched in history and home to the formidable Ark of Bukhara.

Take an adventure through Uzbekistan, a country famous for its ancient Silk Road cities overflowing with mosques, mausoleums and mystery. Beginning and ending in Tashkent, the nation’s capital, this trip will have you following in the footsteps of traders, pilgrims, Alexander the Great and Tamerlane himself. Walk in the shadows of ancient, blue-tiled buildings, sleep in a yurt under thousands of desert stars and spend an evening at a home stay with a family in the Nuratau Mountains.

Welcome to Tashkent, Uzbekistan's capital and Central Asia's main hub. Your adventure begins with a welcome meeting at 6 pm where you'll meet you tour leader and fellow travellers. Please look for a note in the hotel lobby or ask the hotel reception where it will take place.

Travel from Tashkent to Bukhara by train this morning (approx 4 hours). Located on the ancient Silk Road, Bukhara was an important regional and world hub for many, many years and has a long, fascinating history featuring invasions by both Genghis Khan and the Soviet Red Army. The majority of the town centre is filled with beautiful old buildings and, after checking into the hotel on arrival, you'll explore these on a guided tour. Visit the spectacular Ark buliding, a fortress that was occupied from the 5th century right up until its bombing in 1920, the Bolo - Hauz Mosque with its most elegant wooden carvings, and thousand - year old Ismail Samani Mausoleum. This shrine, built around the 10th century, was spared destruction during Genghis Khan's invasion as it's thought to have been buried as a result of flooding. It was discovered and excavated in the 20th century, and became a popular spot for pilgrims and local residents who considered it sacred. In the evening, enjoy a traditional, home-cooked dinner in a beautiful private residence with local friends.

With over 100 architectural monuments scattered throughout the city, there's plenty to be seeing in the well-preserved ancient town. Today, enjoy a full day city tour through sites and places that are steeped in history. Visit the iconic Kalon Mosque and Minerat, one of the most impressive with a view of the city. Stop at the Lyabi - Hauz Plaza, built about 400 years ago around a pool, still full of the old world feel with its picturesque backdrop. Chor Minor, the 4 cornered Minerats stand right behind it too. Don't miss Maghoki - Attar Mosque, which is the oldest mosque in Central Asia built in the 12th century, but was once a Buddhist and a Zoroastrian temple before that. And Ulugbek Madrasah, the first in the city. If you are still energetic after a full day's exploration, perhaps take an optional visit to Hammam Bozori Kord, the oldest Turkish-style bathhouse in Bukhara, before a free evening in town. Your leader can help with suggestions on where to find some authentic Uzbek fare for dinner tonight.

Depart Bukhara and drive to Gijduvan. Here you'll visit a ceramic workshop, where sixth-generation ceramicists Abdulla and Alisher Narzullaev make some truly beautiful pieces. Spend an hour or so at the workshop then continue to Nurata, a drive of approximately 2.5 hours. The city proper was founded by Alexander the Great in the 4th century BC, though archaelogical remains date the first inhabitants of the area many thousands of years earlier, and the ruins of his fortress can still be seen today. From Nurata, the group will head into the Kyzylkum desert to spend the night sleeping in yurts. Perhaps choose to take an optional camel ride in the desert, and enjoy an evening campfire and local music with tonight's dinner underneath the desert stars.

Drive into the Nuratau Mountains for our stay in a Tajik village (2-3 hours). These villages are serene, hidden away in the hills with paths shaded by greenery and buildings made of stone. The region is a desert oasis, with irrigation channels watering crops and giving life to trees. Spend the day hiking to waterfalls or petroglyph sites, possibly seeing the endemic mountain sheep called argali. Learn to bake traditional tandir bread and spend the night in a homestay, learning about the local traditions and culture.

Marco Polo described Samarkand as a 'very large and splendid city,' and after a four hour drive you'll find out for yourself. This is a truly breathtaking place that conjures up images of ancient splendour, and there's perhaps no more well-known sight in Central Asia than the magnificent Registan in the heart of the city. This public square was once a gathering place for locals, where they would hear royal announcements and watch public executions among other things. Also visit the Gur-e-Amir Mausoleum, the resting place of Timur who was the first ruler of the Timurid Dynasty. His crypt was opened in 1941 by a Soviet anthropologist, who found an inscription on Timur's gravestone essentially saying that 'He who opens this will be defeated by an enemy more fearsome than I'. On the following day, the Soviet Union was attacked by Hitler. After a day of sightseeing, overnight in a hotel in town and enjoy a free evening.

Spend a full day in Samarkand continuing to take in the ancient sights and modern sounds. Don't miss Shah-i-Zinda, a stunning avenue of mausoleums decorated with beautiful blue tiles. Its holiest, most loved shrine is built around what's thought to be the grave of Quasam ibn-Abbas, cousin of the Prophet Mohammed and the man who brought Islam to the region many centuries ago. The Bibi-Khanym Mosque is an incredible example of Islamic architecture, built for Timur by Bibi Khanym, his Chinese wife, while he was away. As the story goes, the architect of the mosque fell deeply in love with her and his kiss left a trace on her cheek. Timur saw the kiss on his return and this, of course, led to the architect's execution. Another highlight is a visit to the workshop of Zarif Mukhtarov, one of the few people producing handmade paper in Central Asia as per a 1000-year-old process, the result of which should, he believes, last for 2000 years. Overnight in the hotel.

Depart early this morning return to Tashkent by high-speed train, taking a packed breakfast for us to enjoy on board (approx 2 hours). Enjoy a city tour after arrival. Visit the Amir Timur Square in the center of the city, spend time wandering Chorsu Bazaar. The main building is topped by an impressive dome, and the market sells pretty much everything you could imagine, and plenty of things you couldn't.There maybe the option to catch a performance at the Navoi Ballet & Opera Theatre tonight.This theatre is just one of three that were given the status of 'Grand' within the Soviet Union, the other two being located in Moscow and Minsk. It's housed in a beautiful 20th-century building with a fountain at its entrace, and has played host to classic productions like Swan Lake and some incredible artists. Perhaps get your group together for a final dinner tonight before saying your farewells tomorrow morning.

This adventure through Uzbekistan comes to an end after breakfast this morning. There are no activities planned and you're free to depart at any stage before hotel check-out. 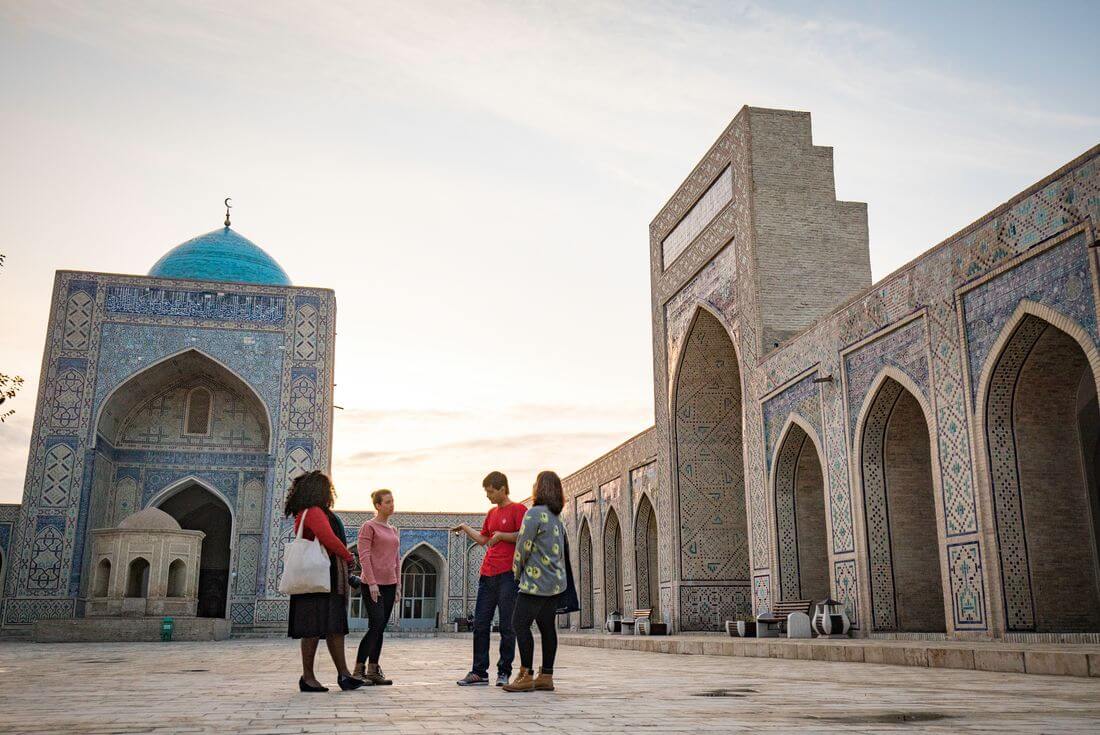 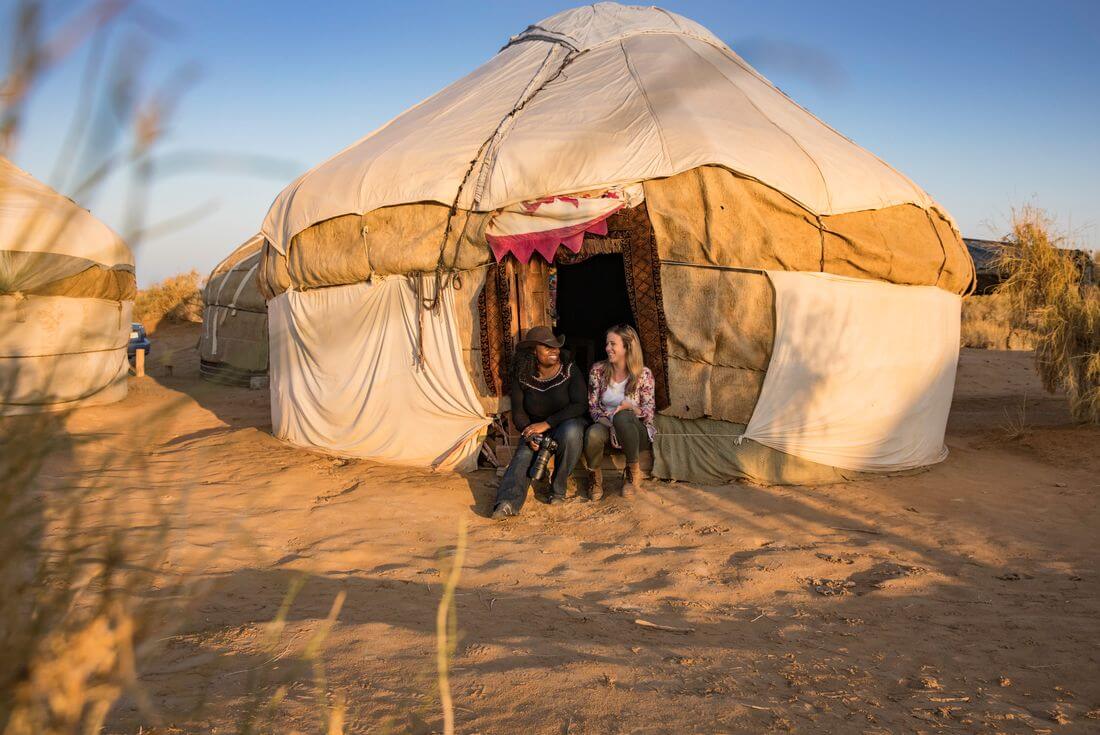 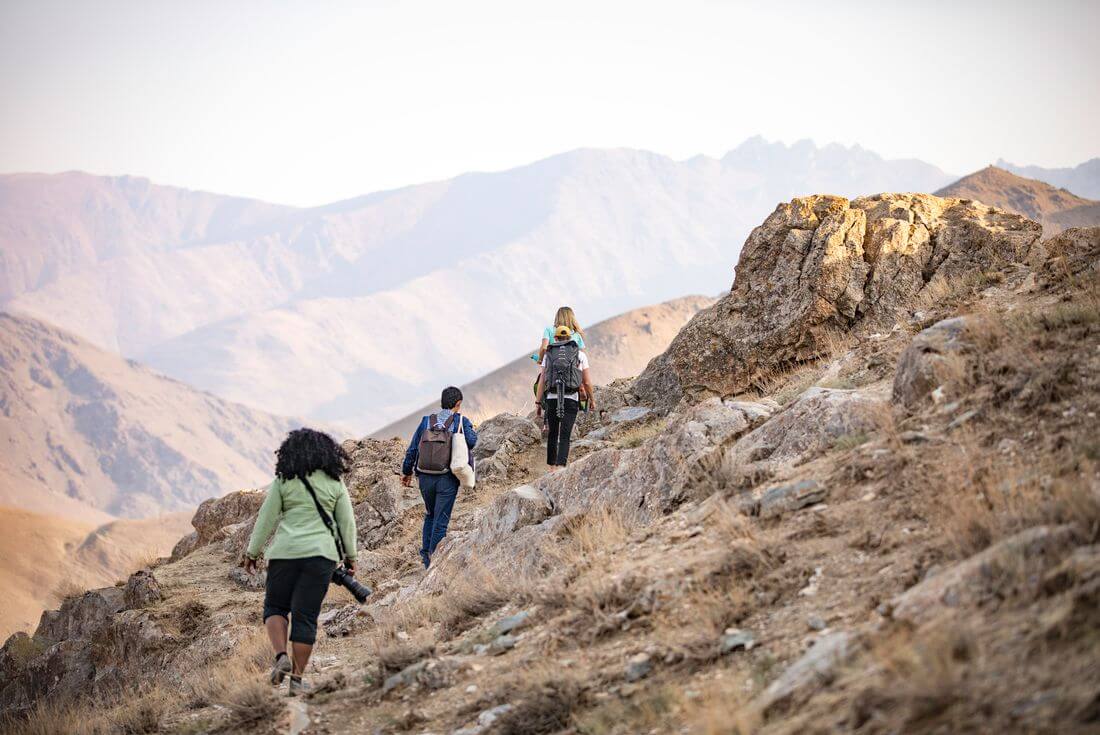 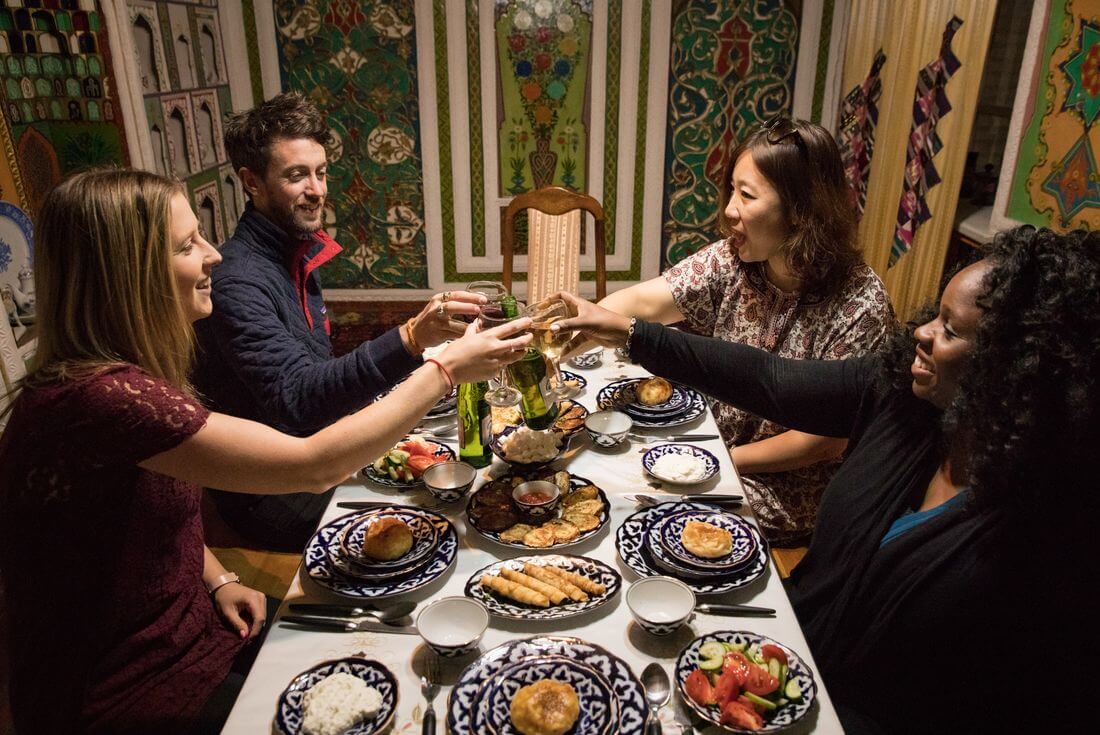 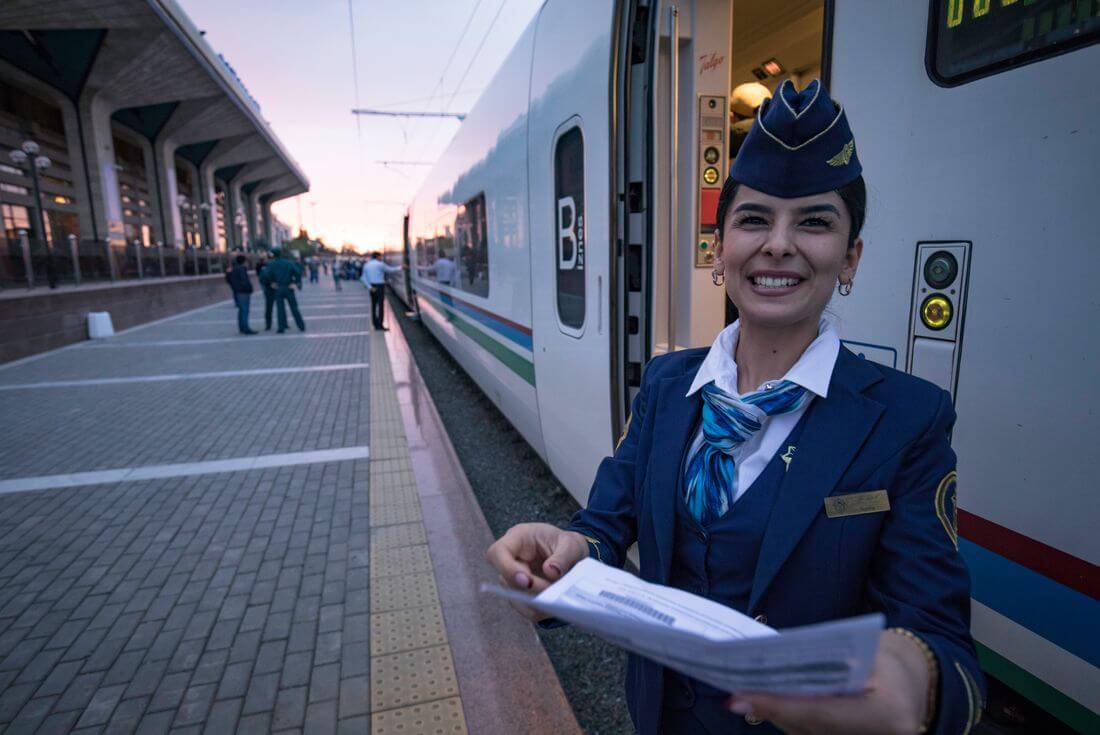